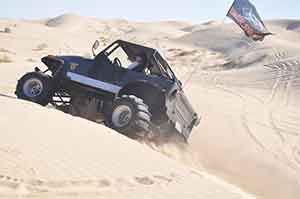 “I have shed tears upon nearly every announcement of the Court, but this time they are tears of joy,” said Jim Bramham, who holds leadership positions with several of the recreationist organizations, including the American Sand Association and California Association of 4 Wheel Drive Clubs. “Our work will never be finished, but this vindicates our long-running, expensive and sometimes controversial team effort to restore balance to ISDRA management,” Bramham added.

The ISDRA, popularly known by many as “Glamis” for the small town within its boundaries, is located near the southern U.S. border in Imperial County, California, and spans roughly 167,000 acres. There is a broad range of management prescriptions covering the area, and over 26,000 acres have been formally designated as Wilderness, where no vehicle access is allowed. The 2013 plan would continue vehicle closures in PMV critical habitat, and allow some form of riding on about 127,000 acres. The Dunes are a prized destination for sand-riding enthusiasts throughout the country, and over 1,000,000 of them visit the area in a typical year.