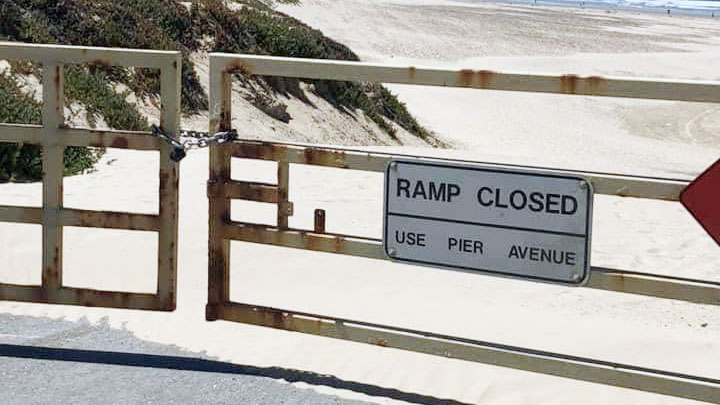 This past year has been a nonstop battle, fighting against a growing list of government environmental agencies calling for the systematic closure of the ODSVRA. When I say nonstop, I mean it. We have been working nearly every day and night just to keep up with the bureaucratic sleight of hand and growing list of threats to OHV recreation and camping at the park. What is happening with Oceano Dunes is an entirely new type of battle we are facing, against a major politically corrupt machine that is supposed to be working for the OHV community. What we are currently facing is unprecedented and frightening.

In March 2020, Governor Newsom ordered the closure of all of California’s State Parks and State Vehicular Recreation Areas (SVRAs), to “slow the spread” of COVID-19. During these first months of closure, we saw numerous days of high dust particulate matter at the local monitoring stations, all with zero OHV activity on the beach. This is interesting because until the COVID-19 closure, the California Coastal Commission (CCC) and Air Pollution Control District’s (APCD) narrative was entirely focused on dust emissions created from OHV recreation. These two agencies forced State Parks to implement dust control measures that included vegetating historically non- vegetated dunes and the installation of miles of wind fencing, all to stop a natural process. But the recent dust data, showing increased dust particulates at the monitoring stations, appeared to have blown a hole in their narrative. Nonetheless, the SLO County (APCD) stuck to their story by manipulating the science and refuted the possibility that there is no correlation between the increase in dust with the decrease in camping and OHV activity. The APCD now claims “the dunes will take decades to heal and return to its natural state before we see any signs of actual results from the mitigation projects and beach closure.” The APCD is needlessly killing this state park and its $200+ million annual benefit to the local economy. Never mind the alarming recent articles by Cal Coast News, which outlined very serious allegations of corruption at both the SLO APCD and California Coastal Commission.

Next, the influx of transplanted residents to the area who oppose off-road and camping recreation, began living out their dream of finally turning the ODSVRA into their very own private beach: bird watching, sandcastle contests, photo shoots on the dunes, collecting shells and sand dollars, riding bikes, horses, and walking the beach. They began a brand new propaganda campaign against OHV for a “Vehicle Free Oceano Dunes.” They began personally and publicly attacking the OHV community during government meetings and community events with lies, name calling, discrimination and disparaging racial statements along the lines of socioeconomic status. They do not just hate our form of recreation, they hate our culture, who we are, our way of life and believe there is not a place in this state for us. What is even more concerning is that the CCC and APCD continue to allow this form of harassment and discrimination towards the OHV community at their public meetings.

With the dust narrative losing steam, these agencies began closely monitoring the seasonal snowy plover bird closure, hoping and praying the birds would begin nesting in the open riding areas. Well, surprise surprise, the plovers began to nest in our open riding areas. There is a major problem with this though. Oceano Dunes is a state legislated SVRA. The Oceano Dunes was paid for by the OHV Trust Fund and is not a bird sanctuary, or a private beach. It is an SVRA. Our OHV Trust Fund solely pays for 100% of the endless environmental projects that occur at the park, not general fund tax dollars! OHV dollars fund the most successful snowy plover breeding program in California and the entire West Coast.

What is most concerning is that just days later, Director of State Parks Lisa Mangat signed the CCC’s Cease and Desist order, complying with the total closure of Oceano Dunes SVRA. There are major problems with her decision. State Parks has but one job to do. Parks is supposed to fight for and protect “all” types of state parks, including the SVRAs. Parks is supposed to preserve and increase our recreational opportunities including OHV, not decrease them. They are supposed to fight! Instead, they have just allowed two more government agencies in the door to start calling the shots at the ODSVRA. Clearly, State Parks has now completely lost control of what is happening at our park. You may ask, “How in the world could State Parks have let this happen without putting up a fight?” Well, this is just the most recent of many failures by State Parks. This is the latest of a larger political problem the off-road community is facing today in California.

For nearly two years, Lisa Mangat has been left in limbo as our non-reappointed director of State Parks. What this means is that she is no longer able to effectively act as the director without oversight and direction coming from the top. State Parks operates under the direction of California Secretary of Natural Resources Wade Crowfoot, a Governor Newsom appointee. Starting from the Governor, down to State Parks and on to the local supervisors running the Park Districts and SVRAs, or lack thereof, this paints the perfect picture of government failure and incompetence.

Right now, we are in the fight for our way of life, and it will not be an easy one. Those who have dedicated their lives to the fight to save Oceano Dunes have been fighting successfully for many years. Sadly, much of this time they have been fighting this alone, with little outside help and support. What we need right now is a commitment from all of California’s OHV organizations, off-road clubs and the entire OHV community, to join us in this fight. We can absolutely win this fight to save Oceano Dunes, but it is up to each of us to do our part. We desperately need involvement from everyone. Please take a few minutes to write and call Governor Newsom, Secretary of Natural Resources Wade Crowfoot, Director of State Parks Lisa Mangat and your elected representatives. Tell them what OHV recreation and Oceano Dunes means to you and your family. When it comes time to vote, ask your candidates regardless of political party, “Where do you stand on off-road recreation? What is your stance for protecting OHV on public lands and State Parks? Have you ever personally had the pleasure to experience OHV recreation? Will you fight for our right to recreate?”