The following is from an article written by Scouts West President Tim Potter to the club:

Note from Dave Henry: The featherless fowl that Tim is referring to is a rubber chicken. When the Sheriff fines a member, the fine is put in the rubber chicken. I guess it’s safer than a bank now a’days. This is all done in good fun and it helps to fatten up the chicken. At the end of the year the chicken gets opened up and the year’s fines are donated to some deserving organization. Most years the fines amount to around $150. When you consider how the money was collected, this represents a lot of breakdowns and other mishaps for the members to incur in a single year.

When the chicken was opened at the 2011 December meeting, there was only $50 in the chicken. Members had not been doing as much wheeling and/or breaking as they usually do. I do have a theory about this; in order for a Scout not to break down it must be left in the garage and that is not a sure bet.

The Chicken would go to Children's Hospital of Orange County (CHOC), for the kids. Four or, five new DVD’s for the kids would make the greatest impact with what the Chicken had to offer. We sat there, all of us looking at each other for what can only be described as the longest, quietest ten seconds in Main Chapter meeting history. We must have all been thinking the same thing. The gift did seem minimal, given the cause. In those ponderous ten seconds, Scouts West Members were asking themselves perhaps the biggest question of all; “how blessed are we?”

Then, another Member must have thought, that’s not a really nice round figure and, contributed even more to the sum, which spurred another round of giving up to $375. Now, we’re really talking about a useful and, meaningful gift to the kids. But, $375 isn’t round either, another Member must have thought and, yet another round of giving ensued bringing the total to over $400, then to over $500. It became a giving frenzy, I tell you, with Members repeatedly reaching into their wallets for more and, more and, more. Members from San Diego and Grapevine Chapters, even our guests for the evening joined in the giving. I swear to you, that in the hour or so after this ridiculous rubber Chicken was first opened, these wonderful people opened their hearts to these kids who are in the care of CHOC and, they opened their wallets, that Scouts West might give them the most meaningful gift possible and, answered the question in thunderous fashion. Truly, we are blessed.

My friends, I must tell you, that while I know what an extraordinary group of people Scouts West Members are, because I have experienced their generosity many times: even I was and, still am as I write this, amazed at what this great group of people can do. Truly, this is by far, the finest group of human beings that I have ever known and, repeatedly they show it. So, you ask if this moment is an apparition and, I tell you; no. It is commonplace and everyday, and it comes in many forms. It is who these people are. It is what this group is, at its core. It is the heart of Scouts West that beat so strongly and loudly that night. And it moved us all to do something greater than any of us was capable as an individual.

I suppose that even the casual onlooker may be able to see, from this account, the type of people who make up this Club. What one might not see though, is the real camaraderie among these folks that transcends the Club: the feeling of oneness that exists between these diverse individuals who come together once a month at meetings, on trail runs and, at Club parties? One might still miss that these people are in many ways a family. They are brothers and sisters, who despite their diverse opinions and imperfections, when together, create something that could not otherwise exist. They are the heart and soul of greatness. They are Scouts West.

In the end, these kind and generous hearted people had donated just over $600 to this cause. Our Sheriff graciously agreed to go shopping, to buy the DVDs that would be the gift to CHOC. He did a wonderful job of selecting 56 brand new DVDs for the money that had been collected. All the movies he was able to get are all first quality movies that these kids will really enjoy. 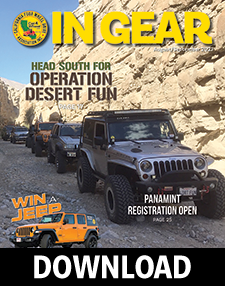