Annually Cal4Wheel holds an event called High Sierra Poker Run held in the Shaver Lake region. My wife and I traveled to the Base Camp on Tuesday accompanied by a fellow four-wheeler, Tommy Irving from Motherlode Rockcrawlers. We had previously planned to meet up with David, Nancy, and Davey Rocha (Kingsburg 4 Wheel Drive Club & Dirt Boogers) who were kind enough to be willing to take us on a couple trails prior to the event. Wednesday morning, we headed out to Brewer Lake and had a great time. What a scenic area, and Brewer Lake was a beautiful little lake out in the middle of nowhere. Thursday, we headed down the trail toward Mirror Lake but due to mechanical difficulties we were unable to make it to the destination and had to head back to camp. Friday morning came way too fast and unfortunately due to my employment, I had to head back home; however, my wife Kitten remained in camp to work the Cal4Wheel booth. As I was leaving, I was thinking about the lack of available communication in that area and it was a little concerning to me as I would have no contact with anyone until the event was over and all were headed home.

Apparently, Saturday morning all went well as the attendees headed out to enjoy a day out on the rocks and would then return to camp and probably talk about their adventures. My attention was quickly piqued at approximately 9:00 in the morning when I received a call from Cody Anderson (Cal4Wheel’s new Central District membership chair) who was on his way to the event when he was stopped at the four lanes (top of the pass). He informed me of the fire that had broken out and stated they were not letting anyone pass. I cannot thank Cody enough for making the call to let me know what was going on. I then began to worry about everyone’s safety. Of course, my first thought was “throw some stuff in the truck, get up there and help get everyone out safely.” The fear of having so many people in harm’s way and not being able to communicate is not a feeling I care to feel again. I called and texted everyone that I could hoping someone would be lucky enough to catch a signal and respond. All I could do at this point is impatiently wait for some sort of communication from anyone. As time passed the more I grew concerned for everyone whose lives could be in danger. Not knowing is the most horrible feeling. I quickly checked CalFire and Sierra National Forest websites so I could somewhat keep abreast of the fire status.

Late afternoon I received a text from Ryan Choate (Ditch Bank Off Roaders) letting me know the camp was fine and no evacuation orders had been implemented. This information was well received, and I started to relax a little thinking all would be okay. David Rocha texted me at around noon to update me that all was fine, and everyone was okay, and the fire was being monitored for the moment.

The next word I received was from Ryan Choate at approximately 3:00 telling me they had already started the evacuation process as the fire had begun moving in the direction of camp. My anxiety level began to increase and the “not knowing” and “wishing I was there” started to kick in again. Jim Bramham called to let me know most of the camp had vacated safely and Kitten was somewhere behind him and Shirley, and there were only a few vehicles left at camp when they pulled out.

I texted Kitten a few more times without an answer, but I knew she was in good hands and many people would be watching out for her. Finally, I heard from my wife. She told me everyone was swift, calm and quiet as they vacated the base camp. The process was well controlled and handled by the event chair and all staff in a calm professional manner.

Although it is unfortunate that many were unable to complete their run, I am delighted to hear not one person from this event was lost to the fire. I am aware some had to vacate without their belongings and even their travel trailers. I am saddened for their losses but happy that their lives were spared. I would like to say thank you to the Sierra National Forest staff for acting swiftly in a controlled professional manner and giving all of our attendees plenty of notice so they could arrange for their departure in a calm manner. I am thankful we are all here to talk about it. However, I now watch the news and see the Army National Guard airlifting all those people via Chinook and Black Hawk from the Mammoth Pool Reservoir area. I cannot help but pray no one will have to suffer the loss of a family member from this horrendous fire. 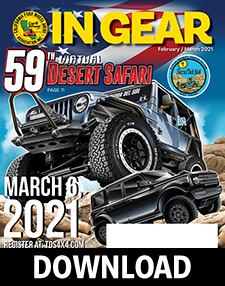