Reprinted from the August 2012 Roughwheelers ‘The Four Letter Word’

Christa & I left Ventura and headed up thru Ojai and took the 33 North, and then intersected to Lockwood Valley Rd to Frazier Park, it is a nice scenic climb up thru the mountains, and we made it to camp at 9 pm. We met Avi, and Jackie his co-driver, Alan, and guest Dennis in silver JK who has joined us before. Weather in Hungry Valley was great, and we had a sandwich for supper, and caught up for a while then turned in.

There were the usual a-holes that like to ride their quads and bikes at all hours of the night, run generators, that is why we as a club like to camp in our out of the way spots to avoid the noise.

I was the first one up on Saturday morning and we made coffee and packed up, and pretty soon the rest of the group was up doing the same. We left camp just before 9 and headed out to the Flying J to get gas and last supplies. There were already some Jeeps parked waiting to meet up and tackle Miller, so we got our butts out of there and headed to the trailhead. We were the first ones there and aired down and got our rigs ready when the first of the other group started showing up.

We left the staging area and started the trail going through the creek and heading up the mountain. I was tailgunner as I was towing my trailer and Dennis was behind Avi, and then Alan as he is running open diffs. The trail has been used a lot and it has changed considerably since the last time I was on Miller back in August 2010.

We crossed the creek and started the climb up the mountain, and not much has changed since the fire some years ago ravaged the area: lots of burnt trees standing, though the brush has made a comeback. We continued on over the hill and then down to Yellow Jacket.
We then followed the stream down towards the end, where we turned around and stopped for lunch. As we were finishing lunch we heard some heavy metal, and a group of 11 rigs, mostly Jeeps and one FJ led by a woman heading down. We waited for them to pass and then made our way back to the junction. At the last creek crossing there is an obstacle and tight brush to go through and guest Dennis broke a metal brake line. The end of the bolt on the sway bar connector had pulled the hard brake line next to body and broke the fitting connecting the flex line. We pulled over and tried to stop the fluid leak by crushing the line with a hammer against the frame.

With some success, we then continued on to our camp spot for the night, under two big Cottonwoods down near the creek. It is very secluded and there was no chance of anyone bothering us with noise. While others set up camp, and chatted, and also we tried to give a better temporary fix to Dennis’ brake issue, by putting a screw into the end and using some sealer to stop the leak, and further crushing the main line to give him some brakes to get down the mountain and on home. It seemed to hold.

We had a nice camp, and fire and dinner, and caught up on the chit-chat.

We had the Geico lizard that was hanging around close to the fire on a rock, soaking up the warmth and he did not seem to be bothered by anyone moving around or putting wood on the fire. Jackie offered him a piece of cooked chicken, but he declined. He hung out until almost dark and then retreated into a dark spot for the night.

It was nice to be out under the stars again.

The temp started to drop and we were tired from the day on the trail, doused the fire and turned in by 9:30 PM. The overnight temps dropped to 43F and it was chilly when I woke in the morning. Jackie had been cold during the night and got up and slept in Avi's Jeep to keep warm.

After a while the sun finally reached us and I was able to start shedding an outer layer of clothing. We had coffee and breakfast and slowly packed up camp. Before setting off we walked down to the creek, and in a spot where the water had dried up, you could see different foot prints left in the dried clay of all the critters that had been at the creek to feed and drink, including deer, raccoon, and a bear. Some people picked up pieces of the dried clay and took them with them as art.

The suns warmth felt great, and we had a drivers’ meeting and started our engines for the days trek. As we were leaving Alan's Yota would not start so I gave him a jump start. We headed out crossed our creek and made our way through the tight brush, and made our way back to the main trail.

Pretty soon we arrived at the bottom of Alamo Mountain and started the run to the top. The trail has changed a lot at the top, due to wear and tear and rains, but we all made it through with no issues; it was a little challenging for me with the trailer behind.

After reaching the top we took a break and then started down giving Dennis space, as he was without brakes, to some degree, but we made it through the park and back to the freeway.

Stopping to air up, we said our goodbyes and hit the road for home. I checked on Dennis via email and he made it home okay. I am sure he was going to give the guys at the dealership hell for screwing up his trip.

It was different taking a new route home since we have moved to Ventura. It was great to get back out again after some time away, and I really enjoy the great outdoors and look forward to sleeping under the stars.

The Miller Jeep Trail is part of the Los Padres National Forest, with the trailhead located near Gorman, CA. A convenient base camp is located at Hungry Valley SVRA. Here are links for more information:

For more information about the Roughwheelers, visit their website at roughwheelers.com 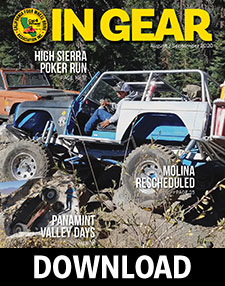