This year’s Central Districts High Sierra Poker Run was a huge success this was my third year in a row of attending. The Kingsburg club does a wonderful job of hosting it each year. There was a good turnout of rigs and people, but one thing I found bothered me and many others as we went on the different trails was the lack of trail etiquette.

The old school trail rules seem to be forgotten with the new wave of drivers. So, after talking to some people this will be a list of all the forgotten trail guidelines. Don’t worry — there are just a few. These will help on the trail and keep people wanting to wheel and not feel discouraged that wheelers have lost the art of decency.

One thing I have been seeing and bothers me the most is the lack of patience when it comes to going over an obstacle; never wheel bumper-to-bumper. Too many things can happen when going over an obstacle no matter how easy you think it is. If the rig in front of you is going over an obstacle, give them space. I have watched people almost touching going over rocks and the person in front needed to back up but couldn’t because the person behind them was too close. The way I learned was when the rig in front of you is done with an obstacle then start it; this will give people space and let them stay calmer. This is also a safety thing should the unlikely and unwanted rollover happen. If you are too close together the rolling vehicle could hit your rig.

Keep an eye on the rear view

The next item that I heard many people complaining about is getting lost on a trail because the person in front of them took off and left the person behind them. The age-old rule is if you can’t see the person behind you in the mirror stop and find out why. On one of the last runs a group of people got lost out night wheeling and spent most of the night trying to figure out what part of the trail they needed to be on to find everyone. With radios and an easy way to talk between rigs this should never be an issue. Sometimes even the most built rig can get hung up and just need a few more seconds to get going again, this is just enough for them to get left behind, and that is never good. Remember, never leave a rig behind you.

These is just a small list, but these three things can make a world of difference in whether a person wants to wheel with your group. I spoke with one gentleman that was very upset with how people are acting, we could not figure out if it was the new generation of wheelers or just the new trend. He spoke of the times when people would stop and help, making sure that no one is left behind on the trail and how giving up bolts and spare parts, even a HiLift handle could make a lifelong wheeling friend and keep people wanting to wheel in groups. There are many more things we spoke of, but these stood out to me. I have always helped get people off trails whether I like them or don’t even know them; getting home is important and we are all in this together. 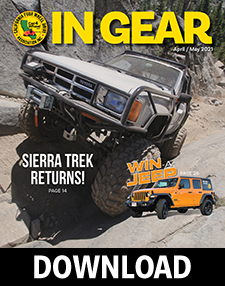